"A Boat's a Boat, But The Mystery Box Could Be Anything!"

Basic soldering skills and tools required. *Please use 28-30 AWG stranded core wire to install. Anything thicker may cause the solder pads to lift*

Super easy install if you have fine-gauge wire and good soldering skills/tools - the audio jack connection is tricky if you don't. Everything about it is smaller than I anticipated.

This thing gets plenty loud on the default setting - I can't imagine using the "loud" mode jumpers. I used to play at 75%+ volume just to hear it in a relatively quiet space, now I rarely go above 30% or so. Does everything it is supposed to, and I have no discernable background noise with the power reg and big cap replaced.

This little board is a lot smaller than it seems in the pics. Very small solder pads. Sounds great tho. Will be buying more.

Here to write another stellar review for this amp as it is great and solved a problematic SP audio issue for me. I have been troubleshooting an SP audio issue for some time now. Have two SPs both with same audio mods including, retrosix SP dehum kit and Heldertech flex amp. Both have major audio issues. They started clean but then began to get more and more distorted speaker audio over time. Lots of other problems too, like audio takes a while to charge up, battery indicator goes on and off with amp, loud popping when on and off, burning speaker coils, etc. It became unbearable, performed tons of troubslehooting including removing and installing all components several times, burning through several speakers, a couple fuses, and in the end the resolution for me was to remove the dehum kit and use this amp instead of the flex amp. The audio issues persisted even without modifications, all parts uninstalled, on my particular SPs but not after installing this amp. If they come back with this amp I will write an update but finally it sounds so good. So close to an ultimate SP! Added a headphones jack and it rocks! Thank you thank you, love this amp! 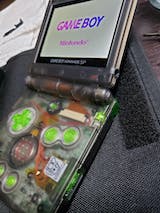 This thing is tiny and thin and excellent. Works great although I don't quite understand the installation as the documents don't explain what each pad is but they work awesomely well, I have tried them in DMG and GBP and both are rocking loud without enabling the extra loudness feature! I can hear the DMG throughout my entire house with this. So great and tiny. In my instance the amplified system noise is not significant but I have updated power regulator/conditioning installed too.

Amp is great for an original DMG Gameboy with zero noise, but not really for the GBC. My GBC equipped with a FunnyPlaying Q5 IPS, Helder power regulator (clean power isn't compatible/recommended per HHL), new Panasonic caps, HHL LED Board, and a Giltesa USBC board. It is completely silent without the amplifier and after installing using the diagram provided by HHL, it creates a very audible hum/buzz. I moved the audio input from the volume wheel to the SP1 point on the GBC board where the OEM speaker was wired too and this helped a little bit, but the hum/buzz is still audible at no/low volume. Long story short, it works, but I'm not that impressed at this point in time and probably won't order another one for future GBC builds unless HHL/RetroSix offer a fix.