The hinges I received are not what I ordered or should I say not what is pictured on the listing or advertised. As an avid SP modder I have encountered many different aftermarket hinges and factory hinges. The hinges pictured on the listing are actually right side hinges, what I received is a universal hinge. With that being said they are decent quality aftermarket universal hinge and for that I give a 3 star. I have yet to see a seller label their hinges properly as right, left or universal. Iam unsure if it is pure naivety by the shops (which also sell expensive modded gameboys) or they purely don’t know, I would seriously question any console sold by a shop that doesn’t know in depth details of a console like this. If these hinges were listed as universal, I would easily 5 star it. Picture included shows a right hinge with the same swooped portion as the advertised picture, hinges on the left and in bag are what was received. 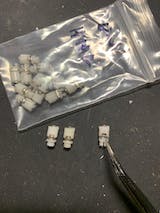 One was a bit dirty, not an issue I'm sure it was just from the factory. Both hinges fit perfectly in oem or third party shells. The feel is perfect, not too tight and not too loose.

B
Brian
They're good

They came kind of dirty but they work well and appear to work fine and snap into place on either side which I haven't really seen before . 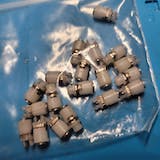 I received 2 dirty used looking hinges 1 white, 1 black, they don’t shut all the way and are flimsy. Super disappointed.

I'm sorry to hear of the issue! Please message us at support@handheldlegend.com so we may get this resolved for you.

Not the same feel as OEM but they work well.

Our marketplace is open to all vendors and creators alike. If you would like more information, would like to give feedback or are interested in selling your produts on our site please contact us at: