Please be patient with us as USPS has told us they are experiencing significant shipping delays. We will make sure you get your order but it may be delayed. Thank you for your understanding.
Sign-In
Register
0

Upgrade your Game Boy Color's display with this modern IPS display. Rich in color and contrast, the Funny Playing IPS V2 cable and LCD, will leave your amazed at how good your old game boy can look.

Use 8RYD2GDCKAW4 for a free glass GBC screen when you purchase a funnyplaying gbc ips kit.

Color and contrast is remarkable and super clear! Easy to install if you just take your time and don't rush it! Test it every step of the way and you'll be good to go! Easy for a beginner like me to install and worth the time and money invested.

R
R.M.
Works great, but some motherboards may have issues

Love the display! Childhood me would have lost it seeing something this beautiful. My screen has a weird issue where the last column of pixels displays garbage. I found out through searching that this is an issue on certain motherboards. It's not noticable when I'm in the zone playing. If you experience this, your screen isn't shot. Not sure if there's a fix or not

W
W.P.
Very nice! Back to play my old games in HD

Great product! My GBC worth playing again after 20 years.

The ips screen looks perfect. Black levels are so good sometimes I can't even tell where the bezel ends and the screen begins!

I used it in this video. https://youtu.be/dN9XaFqUGog

The reason i'm knocking it down a star is because it is super finicky to actually install, I broke the first LCD just trying to get it into a pre-cut shell (which will not be sold anymore according to Handheld Legend, because the cuts were not accurate for the IPS screen) I was offered a replacement, did the cuts that needed to be made, and it was as simple as that, it looks a million times better than the original, but i exercise caution to anybody who wants to do this installation, you need to be careful with it or it could break easily. 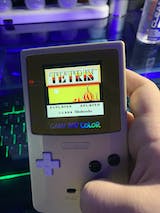 We've teamed up with RetroSix in order bring you custom designed products for all of your retro gaming needs.

Check them out at: https://retrosix.co.uk/

Get the printed book here: