Upgrade your Game Boy Pocket from its low powered AAA battery compartment to a drop-in wireless rechargeable battery pack. Designed and tested in the UK by a reputable modder and builder, the RetroSix CleanJuice Air for GBP is the ultimate upgrade to your console.

I saw that it said they recommend the prestige shells which is all good and well. It also says that it can be used with the original shell with some modification to the battery compartment. This is true, but instead of removing the battery separating plastic, you are going to need ti just take it all out and the shell will need a hole. Even without any plastic and directly on the motherboard, the battery is super tight and barely closes with the cover. 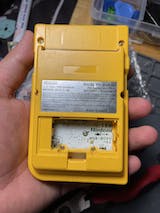 I love to see that the GBP is finally getting some power mods and this has the potential to be awesome but there are 2 big fitment issues that makes this an unfinished product to me. Maybe the production run came out different that the prototypes but even with the lower 2 case screws out and using a retrosix shell that this is supposed to drop into, the battery door does not close. There then is also a gap between the shell halves too because of the 2 missing screws.

I really do like the idea but am not a fan of the execution of this one. I would personally wait for a version 2 of this.