Our Black Friday Sale is on now through Sunday!

Backlight and illuminate your beloved childhood GBC with a modern IPS LCD with improved color, contrast and viewing angle. This enhanced version of the 1.0 kit comes with a custom lens pre laminated to the LCD, choose your color.

I seem to have the same spot of dead pixels that everyone else in the reviews are getting. Also the touch sensor will not work any where when placed inside the Gameboy. I even tried pressing it against the IR sensor.. Upsetting because of how much work went into this build and the price of the Kit. The last one I got was great but this is only my second go at this kit 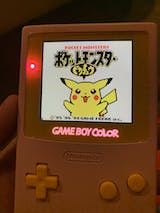 I'm sorry to hear of the issue. Please contact us at support@handheldlegend.com so we may resolve this for you.

M
Mick
Great screen but is has some dead pixels

Installation went smoothly, but unfortunately the screen had a spot of dead pixels in the lower left corner :( 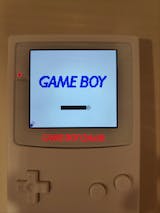 I'm sorry to hear of this issue. Please contact us at support@handheldlegend.com so we may resolve this for you.

Modded my shell to perfection, beautifully smooth fit on the screen, couldn't have gone better.
Screen came with weird dead pixel patch, and when battery gets low the screen flickers.
It's playable, but it's incredibly disappointing.

Edit: touch works ONLY when placed in the IR sensor. Not strong enough to go through plastic shell.

I expected much better. 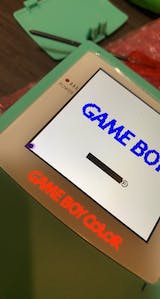 I’ve bought 4 of these total, but only 2 from HHL.

Pros: They look awesome. Not having to center the screen and worry about getting dust between the screen and the lens, also awesome. Th multiple color pallets of the GBC logo on the lens…. So awesome.

Cons: For two out of the three I have I installed so far, I’ve had issues with the touch sensor not working. One worked intermittently at first before failing. The other never worked at all. I tried swapping the sensor, resoldering connections, but nothing worked. Then I went to Reddit for answers and found that many people are experiencing this problem. Common consensus is the ribbon cables are faulty, not the touch sensor. But I don’t know if this is for sure the cause yet. Either way, there seems to be some common issue that funnyplaying needs to address.

I ordered this display to go with a new power regulator, amp, and speaker. It looks amazing when completed, but it was definitely more complicated than other IPS screens to install.

First off, the size. The larger viewing screen was a major draw for me, but it also came with some complications. In order to make it fit, you need to cut directly into the front shell. I'm against cutting original shells, so I would recommend purchasing a 3rd party shell. You can buy the prestige shell from this site, but I would recommend buying directly from FunnyPlaying themselves. They sell a shell that is pre-cut to the exact dimensions you'll need, which saves you time and frustration. Thanks to the pre-laminated screen attached, there's no issue with brackets or aligning.

Second, soldering. In previous IPS screens, the most you need to do nowadays is solder on the touch sensor (and even that is already done for you in some models). This one requires soldering to some very small areas, so if you're not comfortable around a soldering iron, skip on this or find someone who will do it for you.

Third, the wires. With soldering comes wires, and the ones used for this screen are long. And they need to be to not cause frustration during installation. But their length becomes an issue once it's time to close the device. It is even worse on a clear shell. Luckily there is space behind the display screen where they can be bundled up and hid with kapton tape.

Finally, the touch sensor. The one I had been sent is NOT what is pictured in any of the kits. It was a very short sensor, looking like a squat T, and installing it made my device refuse to turn on. Yes, I miss out on a lot of the cool features of the display, but I'll take a device that works over one that doesn't.

Over all, if you aren't uncomfortable with some finicky soldering, I would highly recommend this display. Just make sure to buy a new amp and an aluminum capacitor so your GBC doesn't hiss at you like an angry cat. 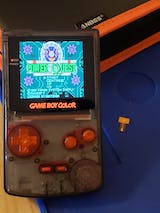 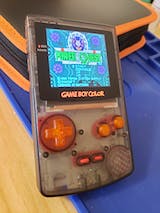 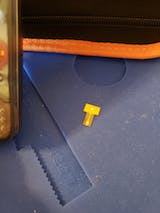