Colorful plastic replacement lenses for your Gameboy Color (GBC). There are no branded Nintendo logos on these due to federal regulations. Rest assured that you are buying a legal and custom made product. As always of the best of quality.

It came with a protective film, but I wasn't aware of that, so it looked like the screen was scratched pretty badly, but it was just the film. Underneath the screen was in pristine condition!

Also, it was easy to install. The adhesive was in two parts however, and it was a little weird to need to remove the paper from the back of the adhesive on the transparent part of the screen separately. I was worried I'd scratch the screen doing that, but it turned out okay in the end.

This lens is a perfect replacement for the original. So glad I got one to replace the garbage that Game Stop uses when they refurbish a system to sell. Now it looks just like my childhood GBC. 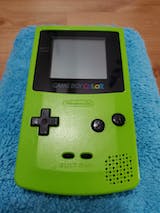