Have a regular GBC glass screen? Use this vinyl mask to hide your edges

I bought two of these and I'm writing this with both of them in mind, the first one was decent, it got the job done but one end kept wanting to poke up and stick out no matter how hard I tried to keep it down, I tried using some thin double-sided tape, but to no avail, I bought another one when wanting to give my GBC a makeover, except this time all of the adhesive came off so I had to yet again, resort to some thin double-sided tape, and the problems I listed before are still present. At this point I'm considering just using the plastic screen that came with the shell and using a sharpie to cover up the space, or just leaving it as is. Gotta say I was hoping the second go around would be better, but I'm left disappointed. 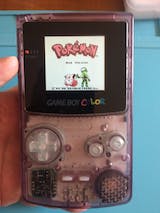 A must buy for tft mod on gameboy color

I bought this lense for my hello kitty gameboy and I LOVED it!

M
M.M.
Gets the job done

If you watch the tutorial, it works well. Easy to use. A little sad that I had to replace my Pokemon Yellow Screen but I am very happy with the product!