Please be patient with us as USPS has told us they are experiencing significant shipping delays. We will make sure you get your order but it may be delayed. Thank you for your understanding.
Sign-In
Register
0

Adds 6.3 watts of power (compared to 2 watt for the largest AA batteries available) giving you 3 times the game time! Charge at any time using a regular USB-C cable, and even reverse charge the console from your phone if it supports power share. That means you can charge your GBA while you are out, using your phone battery.

Designed and tested in the UK by RetroSix.

Drill Guide: 3D print this .stl file to help you drill and file a hole for your USB C female port. Thanks Corey!

Received a board that drained the battery after a few days, contacted support and had a fast replacement. Works great, holds a charge, and works as expected. Super easy install into a retrosix case. Kudos to HHL support!

M
M.M.I.
Great but not perfect.

The fitment into the GBA is pretty good. But I have a big concern, the negitive contact pushes into the battery really hard when you're installing it initially.

If the battery was weak or poorly manufactured it could have punctured the battery and caught fire. I'd recommend putting a few pieces of capton take on the side of the battery that makes contact with the terminal. Just to be safe.

Others have stated that the battery discharged over a couple weeks without use. I have not noticed that behavior. Battery voltage is at 4.128v after 2 weeks of no use, that's essentially a full charge. It should be mentioned that you can just unplug the connector to the PCB from the battery if you're worried about that. But again, I haven't noticed it draining at all.

One gripe about the LEDs on the unit is they're very bright, shining through the cover. It would be nice to have some sort of diffusers for the LEDs included with the kit, to fit the cover.

As for battery life. A full charge, lasted me just over 11 hours with the funnyplaying IPS v2 screen mod (at 50% brightness) with the volume fairly high, playing Metroid. So definitely a good result. That was however the first charge cycle, which tends to be a bit longer than a battery that's been used a fair amount. So your mileage will vary depending on battery age / charge cycles. (Note that lithium ion batteries tend to die off at about 400 full charge cycles. About 2-3 years of moderate use) which in terms of cost. Means this mod will pay for it's self in a couple of months! The battery itself is a standard part you can buy online ($8). So replacing it should be pretty easy in the future!

While I can't speak to if the low-battery mode works or not with the front LED, I can say that I haven't had any complaints overall. I used this battery pack in combination with an (altered) RetroSix shell, so it fits perfectly in the battery compartment. There wasn't anything to modify and it's pretty simple to remove if I ever need to. That is in part because I didn't use the adhesive to keep the battery pack in place.

You can see the LED while the console is charging even through a non-transparent housing, so that's something I was grateful for. I've also left my GBA sitting for a couple of days and it still held a charge.

I know that there have been complaints of overheating, but I've yet to experience it. Not while charging, or during gameplay. Granted, I'm not playing for long hours and I typically unplug my GBA as soon as it's done charging.

All-in-all, I'm pretty happy with this modification and would highly recommend it. 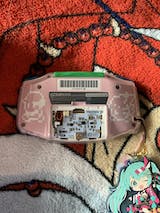 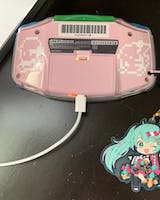 Great product I do recommend two thumbs up

We've teamed up with RetroSix in order bring you custom designed products for all of your retro gaming needs.

Check them out at: https://retrosix.co.uk/

Get the printed book here: