Take your original Game Boy Color restoration to the next level with the custom built, ultra-efficient and clean power regulator designed in-house by RetroSix.

I installed this in a GBC with the unbranded Q5 display. I also re-capped the unit with 100uF MLCC capacitors in place of the C35 and C38 electrolytics and replaced the main C32 capacitor with a 680uF electrolytic by Nichicon. Everything seems to be working great! Everdrive X3 boots up with no issue and display is performing correctly too. Need to do some more monitoring regarding battery life, not sure if this will improve it or not compared to the stock regulator. I also installed mine backwards (removed the stock regulator entirely and placed this one there) just because I thought it was a better look.

Recently modernized my OG gameboy color from
my childhood with the 2.0 q5 IPS LCD screen, this power regulator, clean amp and new speaker + clear green shell + white buttons and green led. The gameboy is a complete work of art now! Yes being a first timer I had a hard time soldering it all together but most of this was due to the amplifier.. the main issue I have is when the batteries go low (you’ll go through a lot of batteries) the gameboy glitches out pretty bad. I love the results the screen is perfect.. I can’t speak much about the results of adding this clean power regulator as I’m a rookie and wouldn’t even know how the gameboy would be if I didn’t install this mod.. 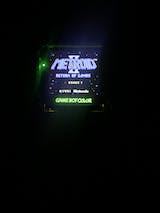 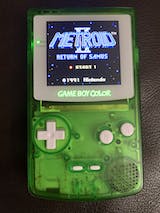 Easy installation onto the PCB and works great!

Install went smoothly, puts out clean power for my aftermarket display and amplifier.

I installed a Q5 IPS screen a while back but it gave me a terribly loud and high-pitched speaker hiss that I solved by daisy-chaining a couple of diodes between my USB-C power board and the system's fuse. The problem there was it was giving me inaccurate battery levels. Since the console was getting kicked-down power, the LED wasn't reliable and neither was the on screen battery indicator. This console also has a fairly new USB-C board on it that I picked up at Retro Game Repair Shop. And wireless charging, because that's just how I like my Gameboys. All that combined led to a less than ideal experience, even with those diodes killing the hiss.

So when I saw that these new voltage regulators released, I had to grab a couple to see if it would solve my issue. I finally got around to installing them tonight and I have to say, despite a small hiccup, it was a success! I had to install the new regulator 'backwards', IE, on the top side of the board where the original regulator was, and using scrap capacitor legs in place of wire. This is because the USB-C board sits on the backside (where it is in the picture for this listing) so I wouldn't have had the room. Insulated the thing, stuck it in place, and bam! It worked! I had to take off my diodes, of course. There's still some very minimal speaker noise (more like a tv fuzz than a hiss) but it's really really quiet. You'd never noticed unless you held it up to your ear with the screen at max brightness.

I DID end up blowing the console's fuse there and I'm not really sure how. Luckily I have a few donor boards on hand, so I had a ready replacement. The system's working perfectly fine now though, so I'm not sure if this new regulator was to blame, or just bad luck. Either way, it's perfectly fine now. This thing is a MUST HAVE for GBC IPS and Q5 mods! Thank you guys so much for making one!