It's great I love all the color options, 36! Of them to be exact. And it gets very very bright. Super responsive no button lag

I've done 4(2 DMG, GBC, GBA) IPS display swaps from HHL so far and this is definitely the most challenging. The support documentation isn't quite as good as other IPS screens AND as I noted its a harder mod. Typically the guides cover some cable management and the full list of items in the kit but no steps outlining the double sided adhesive for the screen or anti-static guards or best how to run the wires. The product description and guide note of an 'optional' OSD menu install in soldering the 3 wires but it shouldn't be considered 'optional' since you'll likely need to adjust the X & Y axis of the screen once assembled (i had to). Soldering to the 'vias', at least for me, was very challenging. The LCD ribbon cable seems the shortest and least flexible of the bunch or the GBP is just too small for its own good.

At the end of the day though HHL's support prevails again as they helped me troubleshoot a screen flicker which seemed to point to the underpowered 1.2v Li-Ion batteries; once I put in some 1.5v alkaline the system worked as expected. 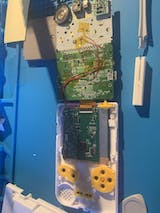 Really liked this kit, installed it in an original Game Boy pocket shell that I trimmed. The picture quality is great and the on-screen display options are nice. A centering bracket would be very helpful but you won't need to worry about it if you get an IPS-ready shell.

It’s actually really handy to be able to adjust the location of the image in the display settings. It was also pretty easy to install which was nice :)

Screen is great but way to hard for me to solder the wires for the extra features. Wish there was a better way

As the description said, the screen is washed out. Reviewing the linked thread, it's not clear what mod is necessary to fix this issue