Keep your old silicone button pads, they are not included.

My order came in great shape and my delivery came in quick, thanks guys.

I knew the shell wouldn't feel like an original, but the plastic feels cheap, and the seams squeak and creak while playing. The holes for the buttons weren't big enough for the buttons and I had to file them to make them bigger. Looks nice though. This is for the DMG colour.

I'm sorry you are having issues with this product. Please contact us at support@handheldlegend.com so we may resolve this for you.

The quality of these shells seems to vary wildly with the colour and materials used. Unfortunately I ordered the yellow one (which by the way is much more of an orangeish tone than the lemon yellow implied by the picture on the site; the printing around the buttons is white instead of blue as well), which seems to be one of the worst. It feels flimsy and creaky, with an uncomfortable "dollar store toy" quality in the hand magnified by the small details: the slightly jaggedy cuts everywhere, the extremely loose fit of the battery cover, the slight translucency of the plastic that becomes immediately obvious with a backlight installed, the way it doesn't quite close up on the bottom end, etc. Assembly was briefly baffling due to its incompatibility with OEM power switches; they're just too big to fit in the cutout, which is a shame because the included buttons and switch are noticeably different in both design and colour from the stock GBP ones, ensuring that it will never look or feel quite right no matter what combination of stock parts and replacement parts you use. The most heinous thing here, however, is that the headphone jack is not enclosed properly. On the OEM shell, there's a rounded cutout on the front half of the shell, with the back half having a cutout that's squared on the outside, then abruptly steps up to a rounded edge about a millimeter into the plastic. It's an odd design choice with an obvious improvement: just make the rear shell's cutout rounded all the way through, right? Rather than either mimicking the original design or taking the opportunity to build upon it, this shell splits the difference and makes the worst possible decision: the cutout is instead squared all the way through, leaving the PCB completely visible and exposed. I've seen worse shells; the printing is fine, there were no scratches or dings out of the box, and the included metallic rear label is a reasonable facsimile of the original; but overall it's clearing a pretty low bar. It'll do for now, but I can't imagine this being a permanent home for my Pocket. 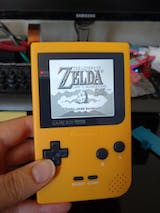 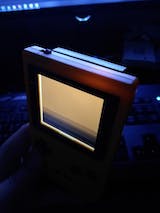 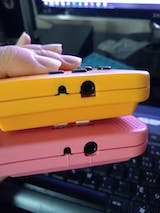 I don't mind the slight pink hue on these white shells, i actually kinda like it. I got a couple of them and the shell itself though is poorly trimmed. Extra plastic around the edges, and the button holes aren't round and buttons didnt even fit without doing some filing.

Used this clear shell with IPS with no install issues (of course after trimming). Be careful trimming this clear shell because every scratch and nick will show!! Screws were a little off going in but just had to be patient to ensure I didn't strip them. Will definitely be buying again.